Water is an excellent solvent, meaning it is easily able to dissolve other substances. “Hard” water holds a high amount of dissolved minerals in its solution because it easily dissolves such impurities. It is not considered a health risk, but it is inconvenient because it causes soap to perform poorly and mineral buildup on household fixtures.

Water becomes “hard” by moving through soil and rock and holding small, dissolved amounts of minerals in its solution. Calcium and magnesium are the two most common minerals dissolved into “hard” water. Water’s “hardness” increases as the calcium and magnesium content within it increases. This is because the degree of hardness in water is correlated with the multivalent cations dissolved. 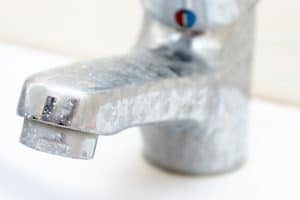 Water is involved in so many household chores and appliances that it is incredibly inconvenient when hard water makes things needlessly more difficult. Hard water affects your dishwashing, laundry, bathing, and many other everyday activities. Make sure you look for the following indications of hard water in your home.

When hard water encounters soap, the dissolved minerals combine with the soap and form soap curds. Soap curds are less effective during dishwashing, so an excessive amount of soap is used to achieve satisfactory cleaning. Similarly, certain synthetic detergents don’t have their desired effect when combined with hard water because the hardness inactivates the detergent’s primary ingredient. Using too much soap or detergent causes dishes to have spotting or a soapy film when dry.

Hard water also encounters soap in laundering, and the soap curds lodge themselves into fabric during washing. This interferes with the washing process and prevents the dirt in the clothes from being completely removed. As a result, the fabric becomes rough and stiff and may begin to develop a foul odor. Hard water affects the clothes by lessening the bright colors and making them appear dingy. These clothes often have a short shelf life since they quickly become scratchy and rough.

Bathing with hard water and soap curds is unpleasant because it affects your personal hygiene rather than a household chore. Hard water causes hair to look dull and feel sticky, and soap curds make hair lifeless and flat. Similarly, soap curds leave a soapy film on the skin when bathing and prevents the skin from returning to its natural condition. The soap curd film often prevents the removal of bacteria, soil, and dirt from the skin and can cause irritation. Bathing in hard water is unhygienic because it causes damage to your skin and hair by failing to remove all the dirt and bacteria.

Hard water causes a film on shower walls, shower doors, sinks, faucets, bathtubs, and other appliances. Soap curds cause a soapy film on dishes, showers, bathtubs, and other water fixtures. This causes certain rooms in the house, such as bathrooms and kitchens, to be much harder to clean and maintain.

Water fixtures and appliances often become inefficient when encountered with hard water, which is frustrating and often costly for the homeowner. Hard water that becomes heated forms a solid deposit of calcium and magnesium minerals. This deposit can cause pipes to clog and eventually need replacement. Clogged pipes reduce water flow and lowers the efficiency of water-based appliances. There are often problems with stains in these fixtures as well.

The National Research Council says that the current results are inconclusive and recommends that further research be conducted on the topic. The World Health Organization (WHO) aims to coordinate a worldwide study on the changes in cardiovascular disease after it encounters hard water, which may finally reach a definitive conclusion.

There are a variety of different ways to test your water for hardness levels. Both public and private water systems have options for water testing.

If you have a private water supply, hire a water testing laboratory to test your hardness levels. The laboratory charges a fee, but the results are also much more accurate than a DIY water testing kit.

DIY water tests can estimate water hardness well and are available at water treatment/supply companies. However, be sure you understand how the test works, the condition of your measured water, and how to interpret the results.

The Environmental Protection Agency (ETA) has two categories to ensure drinking water is of good quality: primary and secondary. Primary standards consider only health effects and secondary standards are based on the properties of the water, such as color, odor, taste, foaming, and staining.

However, there is no primary or secondary standard for water hardness, so it must be measured a different way. Hardness levels are typically reported in grains per gallon (gpg) and milligrams per liter (mg/l) or parts per million (ppm).

The U.S. Department of Inferior and the Water Quality Association defines water hardness as:

Mechanical water softening units are permanently installed in your plumbing to remove calcium and magnesium from the water. Water passes through a media bed and the water beads contain sodium. As the ion passes through, the hard minerals attach themselves to the beads and the sodium releases into the water. This way, sodium is replacing calcium and magnesium and the leftover minerals are discharged.

Precipitating water softeners use borax and washing soda to create an insoluble precipitate with calcium and magnesium. The minerals are unable to interfere with efficiency in cleaning or washing, but the precipitate creates cloudy build-up on surfaces and can damage skin when used for bathing.