One of the most common reasons a smoke alarm keeps beeping is that the battery needs to be changed. Some of the newer ones will have errors in the processor but will clear out once the batteries are changed.

But what happens if it continues to beep even after changing the batteries? The best way is to reset it, manually clearing out the errors from the processor. 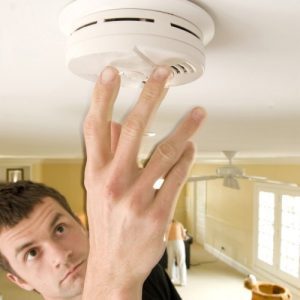 When the smoke alarm beeps irregularly, the issue is related to either the battery or bad wiring. But you should know that there’s a difference in the sounds it produces. Sometimes it will chirp that will come off as a higher pitched tone that will go off regularly about once every 60 seconds.

But the alarm on the other is a random sound for several seconds that will have a lower pitched tone.

Other Reasons Why the Smoke Alarm Keeps Beeping

I just replaced the battery. Why does the alarm keep beeping

Why does the alarm beep when I install a new batter or turn on the air conditioning?

It’s normal for the alarm to beep right after they are turned on after putting in a new battery. In this case:

How can I reset the smoke detector after installing a new battery?

The Importance of Smoke Alarms 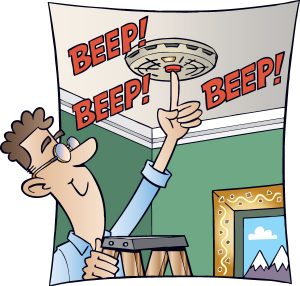 Smoke alarms can be one of the most annoying appliances in each home. When they don’t stop beeping, we just want to disconnect them and not have to fiddle with it again. But doing so can be life-threatening as you may not be notified of a fire until it’s too late.

In any case that you do have a fire in your home, take immediate action to evacuate. Don’t stop for any of your belongings, just proceed to the exit and call the fire department.

As soon as the flames are extinguished, it’s time to address the damage. Call an emergency fire damage restoration company right away to clean out the fire and smoke damage. They should also be able to address any water damage from the firehoses that may have soiled the drywall.

The restoration company should also be able to restore your personal belongings, including electronics, clothing, antiques, and other valuable items. You may be surprised at the number of belongings that can be restored.