What Kind of Damage Is Caused by Lightning and Storms? 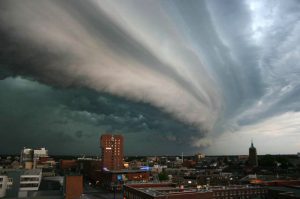 Here are some tips on the potential damage that can be caused during storm season.

Lightning is a natural phenomenon. Dazzling spectacles of light and roars of thunder grace the skies during storms, captivating onlookers with instantaneous displays. Lightning is no stranger. In fact, lightning strikes the continental U.S. at least 30 million times a year. Around the globe, daily lightning bolts strike the earth 100 times per second.

Storms and their associated consequences are often the cause for significant damage. Lightning is often accompanied by thunderstorms. It is common for thunderstorms to unleash tornadoes, pummel hail to the ground below and cause torrential flash flooding.

All of the following are known to cause damage to buildings as well as inflict injuries on people:

Types of Damage Caused by Lightning

The brilliant dances of lightning are highly destructive to humans, land and animals. Lightning researchers conclude that each lightning strike is composed of heat that is four times that of our galaxy’s sun (approximately 50,000 degrees Fahrenheit) and concentrated into a slender bolt as thick as a pencil. The intense strikes of power from lightning have deadly consequences.

Effects of Lightning on People

Human lives are affected by lightning bolts. Lightning kills over 50 people in the US on average, while injuring hundreds. Lightning damage comes in third, after flash and river floods, when it comes to weather-related fatalities. Injuries sustained by lightning are accompanied by long-term, incapacitating symptoms, including neurological and cardio-pulmonary injuries, blunt trauma and auditory injuries. Burns caused by lightning are the most frequently reported cause of death.

Effects of Lightning on Buildings

Not only does lightning spur deaths and injury, but lightning strikes are responsible for billions of dollars’ worth of damage.

Homes and buildings are affected by lightning strikes, as the bolts pass through the electrical wiring within the buildings. Appliances connected to electrical outlets incur severe damage. Computers, phones, sound systems and kitchen gadgets become functionally ruined when lightning strikes the property.

Lightning can spark natural fires. These bursts of flame ignited from thunderous skies transform into grass fires, which put local area homes and buildings in jeopardy.

Types of Damage Caused by Tornadoes

Tornado Alley is well-documented for spawning the highest number of tornadoes annually. Although this area between the Rocky and Appalachian Mountains is concentrated with tornadoes, any part of the U.S. can experience these precarious funnels.

Effects of Tornadoes on People

Scientists have deemed tornadoes as the most violent of nature’s storms. Deaths and injuries are widely reported as a result of tornadoes touching down. At least 80 deaths and 1,500 injuries result from tornado winds per year. Substantial injuries occur after a tornado has swept through a community. Rescue work and cleanup account for the times when most injuries are sustained. The Federal Emergency Management Agency (FEMA) found that a third of injuries during the cleanup were a result of accidental stepping on nails.

Effects of Tornadoes on Buildings 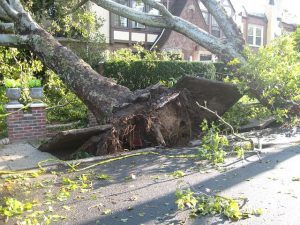 The force from tornadoes is more than strong enough to rip trees from the ground.

With winds blowing at 110 miles per hour, it is no surprise that tornadoes cause extreme structural damage to buildings in its wake. Stronger tornado winds can exceed 200 miles per hour. Cars and trucks become airborne when in the path of a tornado funnel. Large vehicles become deadly projectiles as the tornado funnels whiplash them through the air. Unsecured items often found around homes, like patio furniture and picnic tables, also become lethal missiles that can damage buildings. Even light tornado winds can loosen roof shingles.

Broken tree branches and uprooted trees are common in the aftermath of a tornado. Trees can collapse onto the roof of homes or buildings, causing extreme damage.

Thunderstorms can provoke a natural phenomenon known as flash floods. Intense rains within a short time period spur the swiftly moving waters that characterize flash floods. Flash floods gather momentum within six hours of being set off. The dangerous waters move so fast, at up to nine feet every second, that they can shift rocks weighing up to 100 pounds.

The Effects of Flash Floods on People

Effects of Flash Floods on Buildings

In 2011, flash floods caused over $8 billion dollars in damages. Bridges have been wiped out by flash floods. Cars and other vehicles have been known to be swept away by a depth of as little as two inches of floodwater. Flash floods also severely damage property in its wake, as they carry debris in its waters.

Flash floods are powerful enough to rip trees out of the ground. Colder temperatures can create ice jam flooding, which moves heavy packs of ice through its currents. Structures surrounding the ice jam floodwaters are at risk of damage.

When your home or business is affected by a natural disaster, including nature’s storms, your property may sustain heavy water damage. Dangerous levels of water can even be caused by pipe bursts in the property, overflows or plumbing leaks. No matter what the cause of the water damage, it is in the best interests of the home or business owner to solve the issue before the situation worsens.

Materials found in residential and business properties include porous surfaces, like drywall or wood, which absorb water and cause structural damage. Mold growth is another inherent danger when excess moisture is present.

Water damage calls for the services of a professional water damage restoration company. Certified technicians use advanced equipment to thoroughly dry water damaged goods as well as the property that houses them. Specialists also determine the source of the water damage and take immediate steps to fix it.

Swift action is key when you notice water damage in your property. Damage can progress into surrounding areas, contributing to extensive cleanup and a costlier repair. You can also trust reputable water damage restoration services to quickly return the premises of your property to its original, pre-water damaged condition. Team members are available 24 hours a day to take your emergency call.