How A Pipe Burst Can Cause Water Damage in the Summer

People that live in cold weather climates know to watch out for burst pipes in the winter.  Pipe bursts are a common problem in cold weather because they are caused by water freezing and expanding within the pipe.  What many people do not realize is that a pipe burst can happen any time of year, including the summer.  This affects homeowners all over the U.S.  Burst pipes in a home are a major problem because the water will rush out of the pipe and cause indoor flooding which can lead to extensive damage.  All homeowners must check their pipes throughout the year and take care of any pipe leaks or noticeable damage that could cause a pipe burst.

The biggest cause of burst pipes is frozen water within the pipes brought on by cold temperatures.  The following are other potential causes of a pipe burst that you should look out for: 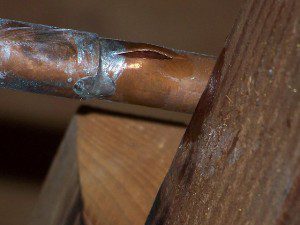 A tiny burst in a pipe can cause a lot of damage.

Signs of Worn Out Pipes

Worn out and weakened pipes have a high risk of bursting because they lose the ability to withstand the pressure from the water.  These warning signs can help you tell if you have worn out or leaking pipes:

A pipe burst causes your home to fill up quickly with water.  If you experience a burst pipe, turn off the water supply to your home and immediately call a water damage restoration professional.  These professionals will not only restore the water damage caused by the burst pipe, but also repair the pipe so you can turn your water back on.  Freezing weather is not the only cause of burst pipes.  Homeowners throughout the U.S. must check their pipes routinely to find leaks, rust, and other signs of worn out pipes before they can cause a pipe to burst.