Your Guide to Restoration and Cleaning Services, Business, and Fun Things to Do in Houston, TX 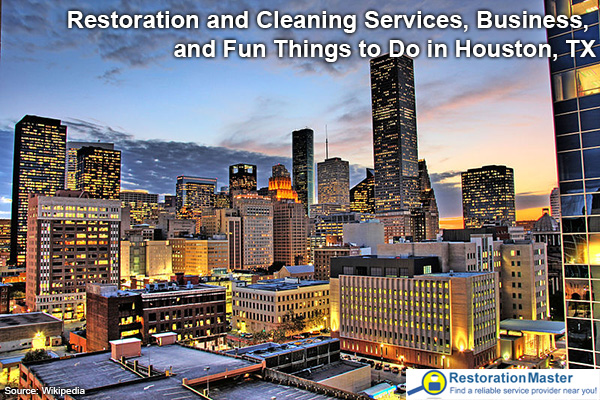 A beautiful night in Houston, TX

Houston, TX is the biggest city in the state of Texas and the fourth biggest city in the United States in terms of population. Incorporated in 1837, Houston is named for the former general and president of the Republic of Texas Sam Houston and it served as the capital for the short lived Republic of Texas from 1837 to 1839. It was originally established as an important port and railroad junction and it became a major part of the oil industry after oil was discovered in the area in 1901. Today Houston has one of the country’s leading economies with a variety of attractions and events that draw millions of tourists per year to the city.

The growing economy and cultural institutions of Houston have made the city one of the better places to live and work in the U.S. and the metropolitan area is the fifth biggest in the country. With so many people living and working in the Houston area, it helps to know that there are reliable disaster restoration and cleaning services that can help you protect your home and your business whether through cleaning and maintenance or disaster recovery following a storm, flood, or fire. Houston is prone to flooding and severe storms and calling a reliable professional in the aftermath of the damage is the best way to start the restoration process. 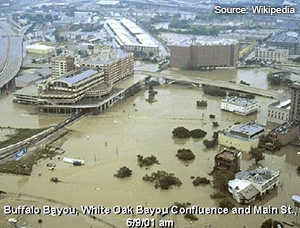 Flood damage is very common for some homes in Houston, TX.

Water damage is very common in homes and buildings and it can be caused by a number of factors including leaks, heavy rain, flooding, and excessive moisture or humidity. The above average humidity and precipitation in Houston coupled with the tendency for tropical storms and flooding in the area makes the homes and businesses in Houston especially vulnerable to water or flood damage. When water damage occurs, it is best to call for water damage restoration services immediately because the water or moisture will continue to spread throughout the building and cause more extensive damage. Reacting quickly will help you get your home or business back on track by limiting the spread of the damage.

A fire can happen virtually at any moment and they can destroy an entire home or building Just as quickly as they start. The damage left in the aftermath of a fire can also be dangerous because the heat causes chemical emissions and the corrosive byproducts can continue spreading damage throughout the building. Fortunately, fire damage restoration professionals are ready to respond to emergencies in Houston to salvage and restore your home or building. In addition to cleaning and repairing surfaces and structures affected by fire damage, these professionals can also remove soot damage from various surfaces as well as odors left from the smoke. 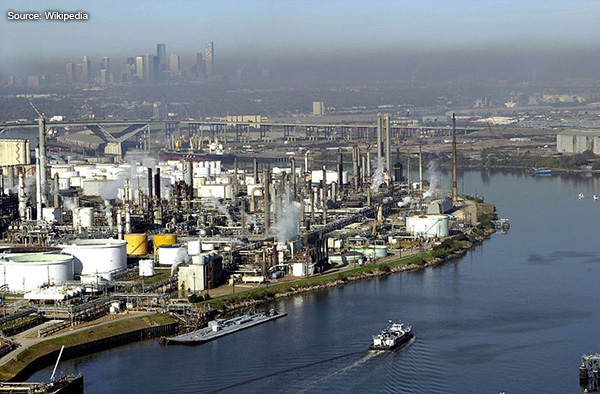 The Houston Ship Channel is a well known place, not only for its rich history.

Texas is known for its hot weather to which Houston is no exception, but its high humidity level distinguishes its climate from that of central Texas. During the summer, the average temperature is above 90 degrees with the high humidity level often raising the heat index to nearly 100˚ F from June through September. The light summer winds provide little relief from the heat and the local residents’ reliance on air conditioning has earned Houston the moniker “the most air-conditioned place on earth.”

The winter in Houston is very mild with temperatures averaging around 53˚F and the area rarely experiences any snow. The rainfall in Houston during the winter is higher than the national average and the clay-silt soil in the region contributes to localized flooding as it is slow to absorb the excess water. The highest amount of precipitation in Houston occurs in the spring and autumn seasons. One of the biggest problems with Houston’s climate is the smog caused by the shipping canal and nearby industrial centers. In 2014, Houston was ranked 6th on the American Lung Association’s list of the “Top 10 Most Ozone-Polluted Cities.”

Much like the rest of Texas, Houston is prone to natural disasters that include flooding, tropical storms, and severe supercell thunderstorms with very strong winds. These natural disasters can cause all kinds of property damage and if your business or home is damaged following a flood or severe storm, it is crucial to call for disaster restoration services immediately. A quick reaction to a natural disaster can save you time and money by mitigating the damage and getting a fast start on the restoration.

This great piece of art is erected in Houston, TX to honor the police officers who have lost their lives.

From Energy to Biomedical Research: The Economy of Magnolia City

The location of Houston along the Gulf Coast helped it rise to prominence as an important shipping center and throughout its history, it has become a center for the energy industry with oil and natural gas and the presence of the Texas Medical Center has made it an important hub for biomedical research. The city is also home to the most headquarters of Fortune 500 companies in the U.S. outside of New York. The strong Houston economy has earned it several distinctions from Forbes magazine that include being ranked third on their list of “Best Places for Business and Careers” in 2006, first for Forbes Best Cities for College Graduates in 2008, and first for paycheck worth in 2012. Houston was also ranked the top U.S. city for job creation by the U.S. Bureau of Statistics in 2013.

Minute Maid Park – this is where the Houston Astros Major League Baseball team hosts its games. Many People enjoy watching baseball there.

canal at the Port of Houston. The Port of Houston leads the nation in U.S. exports as well as well as building and exporting oilfield equipment. The rising gas and oil prices around the world actually benefit Houston’s economy due to the large presence of oil companies that include Phillips 66. Halliburton, and Marathon Oil.

Houston, we have a problem!

Houston is routinely ranked among the best U.S. cities to live and work on the strength of its economy and
the providers of residential and commercial cleaning services in the Houston area help homeowners and business owners maintain their homes and buildings. A clean living space and work space will create a much healthier environment and maintaining a clean building can help your business make a better impression on employees, customers, and clients.

Most companies devote their time and resources to running a successful business which means that they may not have the resources in-house to adequately maintain their facilities. If a business in the Houston area could benefit from regular cleaning but cannot feasibly do it themselves, there are quality janitorial services available in the Houston area. A good janitorial service provider can clean every aspect of your office or building including the restrooms, windows, and carpets and they offer scheduled cleanings to keep your building consistently in top shape. If your workspace is a specialized facility such as a manufacturing center, oil refinery, or production plant, it can be cleaned by professionals that provide commercial cleaning services in Houston.

Keeping a clean home is beneficial for your health and well-being and one of the best ways to keep your home clean is with professional carpet cleaning services. Companies that provide carpet cleaning services to the Houston area can generally clean the upholstery of your furniture with the same cleaning method used on the carpet and they can also clean hard surface floors. Dust, soil, and other debris accumulate within the fabric of carpet and upholstery and within the crevices of hard surface floors which cause the floors or furniture to appear worn out. Having this debris removed by professional carpet cleaners will not only restore the look of your floors and furniture, it will also help extend their longevity.

Much like the other major cities of the U.S., Houston has its share of crime including violent crimes and trafficking. While the overall crime rate in Houston has been dropping since 2009, it is still much higher than the average crime rate in the U.S. Houston has a very high murder rate, ranking 5th in the nation as recently as 2010, and its location on the Gulf Coast has made it a large hub for drug and human trafficking. 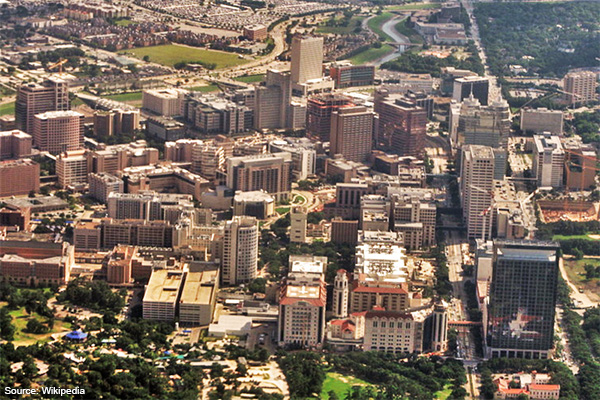 Even as the crime rate in Houston continues to improve, there is still a possibility of violent crimes. The scenes left behind after a violent crime can be grim which is why it is best to call a specialized professional that provides trauma scene cleaning services. Not only are trauma scenes overwhelming and difficult to face, but they are also quite dangerous with biohazard materials such as blood and other bodily fluids that can spread infection. Calling a trauma scene cleaning professional will ensure that the scene is cleaned and sanitized effectively and they approach each scene with sensitivity and compassion for those who have endured a loss.

Art and Culture in Space City: Fun Things to do in Houston

Houston is one of the most diverse cities in the American South with many artistic and cultural institutions that draw millions of tourists each year. The following are among the most popular Houston events and attractions: