Your Complete Guide to Restoration and Cleaning Services as Well as the Events and Attractions of Fort Wayne, IN

Fort Wayne, IN is located in the northeast corner of the state and it is the second largest city in Indiana. The city is named after American Revolutionary War statesman Anthony Wayne who oversaw the construction of Fort Wayne in 1794 as the last of several forts built in the area. These forts became the settlement of Fort Wayne when a trading post was established at the point where the St. Joseph River, Maumee River, and St. Marys River meet. Fort Wayne rose to prominence as one of the leading manufacturing centers of the U.S. after the completion of the Wabash and Erie Canal and today it has a diversified economy and is the cultural center of northeast Indiana.

Fort Wayne is largely considered a great place to live and work having been given the All-America City Award in 1982, 1998, and 2009 as well as the Outstanding Achievement City Liability Award in 1999 given by the U.S. Conference of Mayors. As a result, there are many people that make their home and their living in Fort Wayne and the surrounding areas and being aware of the local disaster restoration and cleaning service providers can help you maintain your home or building. The Fort Wayne area is prone to experiencing severe weather throughout parts of the year and reacting quickly to damage, whether caused by weather or other factors, is the best way to protect your property from extensive damage and repair costs.

Water Damage Restoration: Dealing with Floods and Humidity on Fort Wayne, IN 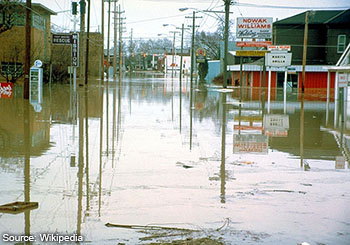 The spring and summer seasons in Fort Wayne tend to be humid with significant rainfall which can contribute to water damage in homes or buildings. Water damage can be caused by rain and humidity as well as other factors such as leaks in the pipes or fixtures, floods, and sewage backups. When water damage is discovered, it must be dealt with immediately because the water or moisture will continue to spread through the building and the humid climate of Fort Wayne will only make it worse. There are professionals in the Fort Wayne area who provide water damage restoration services to remove excess water and dry and restore your home. Reacting quickly to water damage can save you the cost and trouble of extensive repairs.

Cleaning up Smoke and Fire: Fire Damage Restoration in Fort Wayne, IN

Fires can be very dangerous no matter what size they are and after securing the safety of everyone involved, it is important to immediately start restoring your home or building. Soot and corrosive byproducts that are left over from a fire can cause more extensive damage that will eventually become permanent and beginning the restoration quickly will help prevent permanent damage and get your home back to normal. The fire damage restoration professionals in the Fort Wayne area respond to emergency fire damage situations 24 hours a day to help minimize your losses and restore your home to its original condition. They can also deodorize homes and buildings to remove lingering smoke odors.

Sudden disasters can happen in many forms including severe storms, floods, or accidents and if your home or building has sustained extensive damage in a disaster, it is crucial to get it secured and restored. Failure to secure a building after such severe damage can lead to more expensive repairs or even cause a building to become unsalvageable. Fortunately, the disaster restoration professionals in Fort Wayne are ready to respond to all types of disasters to help secure your home or building and provide a variety of restoration services to help restore it to its original condition. Their quick response will help minimize the interruption to your life caused by the disaster and get your home restored before it becomes unsalvageable.

Fort Wayne Weather: Humidity and the Change of Seasons

The northeast region of Indiana has a humid continental climate with four distinct seasons that generally include hot and humid summers with cold winters. The summers in Fort Wayne tend to have average highs in the 80s with humidity levels that can make it feel even warmer. Most of the rainfall in Fort Wayne occurs from the spring through the fall with the yearly average precipitation over 38 inches. The winter season has average lows around 20 degrees with an average of about 33 inches of snowfall per year. Sometimes the area can have lake-effect snow but this snow is usually pretty light.

The Cathedral of the Immaculate Conception

Fort Wayne is no stranger to severe weather as thunderstorms are common throughout the spring and summer seasons. These thunderstorms have been known to cause flooding of the rivers and Fort Wayne has even experienced tornadoes that have caused significant property damage. If severe weather causes damage to your home or building in Fort Wayne, make sure to call the disaster restoration professionals for emergency repair services. They can provide restoration and repair services for all types of storm damage that include board-ups, water extraction, content cleaning and construction.

From Manufacturing Hub to Diversification: Economy in the Summit City

Fort Wayne’s history is heavily steeped in the manufacturing industry from its beginning as a trade stop on the Wabash and Erie Canal up through the deindustrialization of the 1970s and 80s. It was connected to other major Midwest industrial centers including Chicago, Detroit, and Cleveland by the railroad and during its height in the early to mid-20th century, Fort Wayne was home to major manufacturers such as Falstaff Brewing Corporation, General Electric, Magnavox, and Old Crown Brewing Company among others. As the major manufacturers began closing, downsizing, or relocating in the 1970s and 80s, the unemployment rate of Fort Wayne rose until General Motors opened a plant in 1987 that is still one of the city’s largest employers.

The economy of Fort Wayne became much more diversified in the 1990s and 2000s to include other sectors such as health care, distribution and logistics, professional and business services, financial services, and leisure and hospitality in addition to the still present manufacturing sector. The defense industry also makes up a significant portion of Fort Wayne’s economy as the Fort Wayne Air National Guard Station and companies such as BAE Systems and ITT Exelis employ many in the area. The Parkview Health System and Lutheran Health Network are Fort Wayne’s largest employers and the city is home to the headquarters of several companies including Do it Best, North American Van Lines, Franklin Electric, Sweetwater Sound, Medical Protective, and Indiana Michigan Power among others.

Carpet and Upholstery Cleaning for Fort Wayne, IN

Fort Wayne has taken great strides to diversify and improve their economy since the decline of the manufacturing sector in the 1970s and 80s and as a result, the city has become a great place to live and work. If you own a home or business in the Fort Wayne area, keeping the home or building cleaned and maintained is important and one of the best ways to ensure the cleanliness for an entire building is with professional carpet and upholstery cleaning services. The carpet and upholstery cleaning professionals in Fort Wayne can remove dirt and debris from all types of carpet and upholstery fabric as well as stains to restore their appearance and improve their longevity. Maintaining the cleanliness of your carpet and furniture also helps improve the appearance of the interior of the entire building.

From Architecture and the Arts to Extensive Public Parks: Fun Things to do in Fort Wayne

Fort Wayne is the major cultural center of northeast Indiana with a variety of museums and art galleries, a vibrant performing arts scene, and a large public park system. In fact, tourism has caused the leisure and hospitality sector of Fort Wayne’s economy to grow as more people are visiting the city. The following are among the most popular Fort Wayne events and attractions.