Protecting your Home from Flash Floods in Desert Climates

Desert climates are very dry with low annual precipitation as some areas, such as Las Vegas, receive as little as 5 inches of rain per year.  With such a dry climate and little rainfall, it seems logical that flooding in the desert would be rare as well but the natural desert conditions actually increase the potential of a flash flood, especially during monsoon season.  It is important for people that live in desert climates in California, Arizona, and Nevada to be aware of the potential for flash floods as they happen very quickly and can have dangerous consequences for those who are not prepared.  Understanding how flash floods happen in dry climates and how to protect your property can help you avoid the worst consequences of a flash flood.

Monsoon Season in the Desert 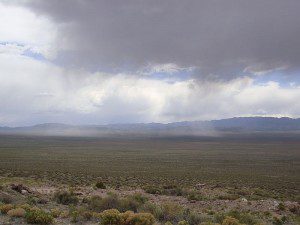 Monsoon season is a period of increased storm activity in the Southwest desert region of the U.S. that lasts roughly from June through September.  During Monsoon season, high pressure air from the Four Corners Region combines with low pressure air from the heat of Mexico and the Southwest desert which forces moist air inland from the Pacific and Gulf of Mexico.  These conditions cause desert monsoons that bring high winds and heavy rain to the area.

Why Monsoons Cause Flash Floods

For most of the year, the desert ground is dried out and baked by the sun which leaves it too hard to absorb rain water.  As a result, any rain that falls will continue to move to lower ground until it finds its way into a canyon, basin, or body of water.  The lack of soil absorption which causes the water to keep flowing towards lower ground creates a huge risk of flash flooding because the water has nowhere to go.  Even areas that are untouched by rain can be effected by flash floods as rain water from nearby communities will flow through the area in search of lower ground.

If you are caught driving when a monsoon hits, be very aware of any flooding on the road and if part of the road is flooded, the best thing to do is turn around and find dry alternate routes.  Driving in a flash flood is very dangerous because the depth of the flood water can be deceiving and it has a current that is strong enough to carry a vehicle away.  If the car becomes surrounded by water as you are driving, you should immediately stop and exit the vehicle and move to higher ground.

Preparing your Home for Flash Floods. 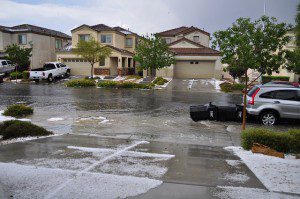 Flooding in Las Vegas, NV from a hailstorm in September 2011 Source: Flickr

Flash floods can happen very quickly during a storm or as a result of a storm in a nearby community which makes it very important to have your home and property prepared.  Remember that water in a flash flood has a current which can knock over trees and power lines as well as cause damage to the roofing and siding of your home.  Before monsoon season, evaluate your home for any structural damage that needs to be repaired and either secure or remove outside objects that can cause even more damage during a flood.  It is also wise to move valuable belongings to the upper floors of your home.

The desert climate of the Southwest region of the United States creates an environment with an elevated risk of flash flooding and residents who live in these areas should know what actions to take to protect themselves and their homes from flood damage.  While taking the actions described above can help reduce the risk of damage during a flash flood, there is still a chance that severe flooding can cause damage to well-prepared homes.  If this happens, call a water damage restoration professional immediately to remove the water and repair the damage before it gets worse.  The rain during monsoon season is a much needed break for the arid desert region but it is important not to lose sight of the potential danger of flash floods.