What to Expect from Professional Odor Removal Services

Odors are a normal occurrence in homes and buildings as the number of potential odor sources makes them inevitable. Foul odors can be concerning when they linger and are tough to eliminate. Airing out the property and using air fresheners aren’t always enough to address unpleasant smells. Lingering odors can indicate that there’s serious damage that has been done to your property, such as water damage, mold growth, or smoke damage.  In such cases, professional odor removal services, and possibly even mold removal services, are essential to restore healthy breathing air in your home or business. Basic cleaning services will not be sufficient.

Odor removal professionals have the advanced equipment, specialized products, and knowledge to thoroughly conduct complete odor removal. Not all odor cases are treated the same, though. Proper odor removal varies based on the source of the smell, but professional odor removal services can address these issues. No matter what’s causing the smell, though, the odor needs to be addressed at its source.

Read on to learn more about the different sources of foul odors and what to expect from professional odor removal services.

What Can Cause Lingering Odors? 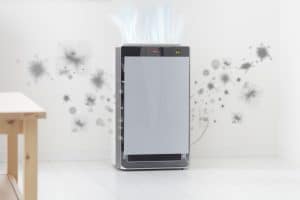 The most important step in odor removal is working at the source of the odor.

When there are biological materials present on a property, such as blood, bodily fluids, and other similar materials, they can emit a foul smell. These cases are also dangerous to deal with because these biohazard materials can cause disease and/or infection. It is very important that biological matter is treated properly. Professionals are trained to clean biological matter and biohazards in a safe manner, leaving the area clean, sanitized, and free of odors.

If your property was recently the site of a fire, the smoke from the fire can leave behind an odor after the fire has been extinguished. Cigarette smoking indoors can also be the source of foul, lingering smoke odors. The small smoke particles become absorbed by various materials in your home or business which is what causes the odor to linger. Because of this, mere surface cleaning won’t eliminate the smoke odor. Professionals know how to effectively clean materials and belongings to rid them of smoke particles, ensuring that the smell is no longer present in your home or business.

Mold needs two things to thrive: moisture and an organic food source. Mold spores often use the cellulose found in common building materials, such as drywall, as a food source. That said, when properties suffer water damage, mold growth often soon follows, causing even more damage to your home or business and potential health concerns to any inhabitants. When mold grows, it produces a musty odor that remains until the mold is completely removed. Professionals can properly address and remove mold growth and ensure that the odor it produces is gone.

What Does Professional Odor Removal Entail?

The most important step in odor removal is working at the source of the odor. Otherwise, if you don’t address the source, the odor will continue to linger. This is why professionals will work to remove whatever is causing the odor. Using various deodorization techniques, professionals also work on cleaning the affected air spaces, objects, and structural elements.

HEPA stands for high-efficiency particulate air. HEPA filtration works to remove lingering odors from air spaced by filtering out the odor’s particles. This ensures that the air is thoroughly cleaned and safe for breathing.

Hydroxyl molecules are made up of a hydrogen and oxygen atom that have chemically bonded. Hydroxyl generator technology produces hydroxyl molecules that eliminate odor contaminants from the air.

Ozone can deodorize by destroying the bacteria, molecules, and other particles that produce the odors. Ozone is comprised of three oxygen atoms and quickly reacts with whatever it comes into contact with. The way ozone odor removal works is that ozone’s third oxygen atom allows itself to become attached to other molecules and change the structure of the molecules, thus eliminating the foul smell.

If you have a persistent foul smell in your home or business, then you should seek assistance from a professional odor removal service. The source of the odor is likely a serious issue that can only be addressed by professionals.

Professionals have the knowledge, equipment, and products needed for effective odor removal. They will work at the odor’s source to ensure that the smell is effectively eliminated. This also ensures that the odor will not return. From biological matter to fire and smoke odors to musty smells from water damage and mold growth, professionals know how to remove these odors in a safe manner so that you can have clean, refreshing breathing air in your home or business again.