What Is A Biohazard?

What exactly is a biohazard?

A biohazard is a material or substance that threatens the health of people and other living creatures. A few examples include toxic chemicals, medical waste, and other materials you expect to find in a laboratory. However, there are many situations in everyday life where you may encounter a biohazard. Potential biohazards should always be avoided, but if a trauma scene occurs on your property, do not attempt to clean it up yourself. Instead, call a professional to safely and properly remove the biohazard from your property.

Examples of bodily fluids include tears, sweat, semen, urine, or vomit may contain bloodborne illnesses, such as HIV, hepatitis B, or hepatitis C. Events that cause blood and bodily fluids or items that have been contaminated by those products pose a threat to anyone who encounters it. Bloodborne pathogens, bacteria, and viral contaminants can spread and pose a health risk. 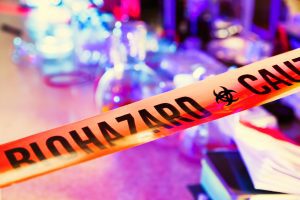 Biohazard and trauma scenes should be avoided due to health risks,

A crime scene can be any number of things, such as a serious accident, homicide/suicide, or any other violent crime that results in serious injury or death. Encountering such a scene is emotionally distressing and can be dangerous. It is highly advised that you call law enforcement or other emergency services and avoid the scene, especially if blood and bodily fluids are present. A crime or trauma scene is considered dangerous because exposure to these fluids can result in disease or infection.

Illegal production of drugs is potentially dangerous because of all the chemicals used in the process. Production of methamphetamine, heroin, and other drugs use volatile chemicals that could cause a fire or explosion. The residues of these toxic chemicals absorb into the skin and all objects and surfaces, so the materials used in or around an illegal drug laboratory are considered dangerous as well.

All items exposed to illegal drug production are disposed of because frequent exposure to these chemicals can cause all kinds of health problems, such as birth defects, blindness, and damage in the kidney, liver, and lungs. Biohazard and trauma scene professionals will follow all federal and state regulations while cleaning up all materials and objects involved in the illegal production of drugs.

An unattended death is when a person or animal dies alone and their body isn’t found immediately. This is most common in people who live alone, especially if they are elderly or sick. However, unattended deaths can be caused by any number of things, such as overdose, accidental death, suicide, or homicide. If an unattended fatality is part of a crime scene, contact law enforcement, but if you encounter the natural unattended death of a family member or pet, be sure to call a professional. Dead bodies are often infected with pathogenic organisms and can spread disease if the area isn’t properly cleaned and sanitized. 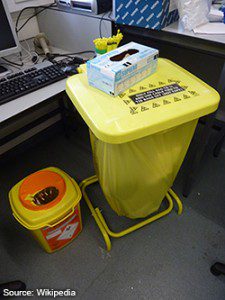 Professionals dispose of biohazardous waste in a biohazard bin.

Raw sewage is often a problem for homeowners who have flood damage. Floodwater and sewage may contain fecal matter and that can be a potential health risk. Sewage is a biohazard waste and may also contain viruses, parasites, and bacteria. Diseases that are caused by exposure to raw sewage include dysentery, typhoid fever, hepatitis A, E.coli, and more. Items that have encountered sewage must be carefully sanitized and cleaned to remove all traces of waste.

If you encounter a biohazard in any form on your property, avoid the scene and call a biohazard removal company. There are many health risks associated with biohazard and trauma scenes, so the smart choice is to allow professionals to disinfect, sanitize, and clean the area.

Crime scene cleaners are compassionate and will work diligently to restore your property to the way it was before the biohazard or trauma scene occurred. We understand how important it is to return to normalcy after a traumatic event, so our technicians will quickly and effectively clean up all biohazardous waste.