You do not have to work for a laboratory or medical waste facility to encounter biohazard materials, there are several more common situations in which you may encounter hazardous materials yourself.  Biohazard materials are generally defined as biological materials that contain harmful substances including viruses, bacteria, mold, parasites, and others that can lead to infection or disease as well as damage to the natural environment.  There are so many materials that fall under this label and it is very important for people to be able to recognize when they are faced with hazardous materials so that they can avoid contact and call the right professionals for biohazard waste disposal and cleaning. 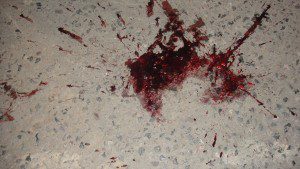 Blood is a liquid biohazardous waste material that can spread infection or disease. Source: Wikipedia

The following are the four main categories of hazardous waste to help you realize when you have encountered biohazard materials:

Liquid biohazardous waste consists of bodily fluids such as blood and other secretions from humans and animals.  All types of bodily fluids may be contaminated with bacteria, viruses, or other toxins that can spread disease which is why you should never attempt to clean up these materials yourself.  This type of hazardous waste is typically found at the scene of an accident or violent crime and in these cases, a professional must be called in addition to EMT’s and law enforcement officials to clean and restore the scene.  If there is under 25 milliliters of liquid biohazard waste at the scene, it is normally treated as solid biohazardous waste. 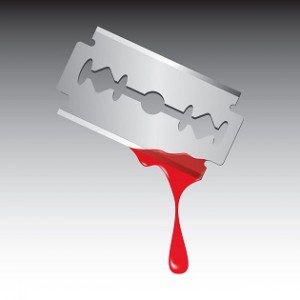 Sharp objects must be treated differently than solid biohazardous waste because there is a much higher risk for sharps to spread infection.  Objects that fall under this category include anything that is sharp enough to puncture skin and has also come into contact with biohazard materials.  Common biohazardous sharps include blades, syringes, scalpels, microscope slides, and broken glass tubes among many others.  What makes biohazardous sharps so dangerous is that they can penetrate the skin and allow toxins from the biohazard materials to enter your bloodstream.

Pathological waste refers to human or animal organs, tissues, and body parts that have been removed and are potentially contaminated with harmful toxins.  This category also includes animal carcasses that may be contaminated with infectious agents or parasites but does not include teeth.  These materials should always be cleaned up by a certified professional because attempting to clean them yourself is not only dangerous, but it can also be emotionally disturbing.