What is FEMA’s High Water Mark Initiative and How Does it Help Protect Your Property from Flooding?

Every property, both commercial or residential, in the United States is at risk for flooding. Whether the zone is at a low, moderate or high risk, flooding can happen anyplace it rains—which means anywhere on earth. Environmental flooding may be caused by numerous natural or manmade events: overflowed river banks, heavy rainfall, dam breaks, gutter overflows and ice melts.

When an area inside a community is at a high risk for flooding, residents should be aware. The Federal Emergency Management Agency (FEMA) recognizes the importance of imparting knowledge about flood hazards to property owners around the country. In partnership with the National Flood Insurance Program, which is the single entity that offers flood insurance to home and business owners in the US, the High Water Mark initiative (HWM) was established. Federal funding drives the efforts to educate communities about flood risks. 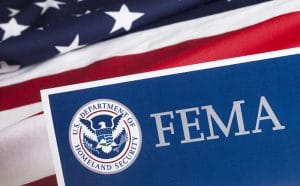 The Federal Emergency Management Agency (FEMA) recognizes the importance of imparting knowledge about flood hazards to property owners around the country.

Five to 20 red, white and blue HWM signs that indicate flood risks are posted around a community. In New York City, for instance, HWM project coordinators, like Jim Jensen, post signs to mark where storm surges and flooding have produced high water lines. Signs are posted in places like under Williamsburg Bridge, which is a major hurricane risk zone. Less official areas receive ample attention, too. Waterfront bars, like the aptly named Watermark, are ideal spots HWM signs are placed.

Superstorm Sandy revealed vulnerable parts of New York City that are at risk for coastal flooding. Well-recognized locales like Staten Island and Lower Manhattan benefit from High Water Mark signage. Vicinities where Superstorm Sandy did not have a significant impact but that are still at risk include such areas as LaGuardia Airport and the South Bronx. With the HWM program, community members are more aware of the flood dangers, even though Sandy failed to hit hard in these locales.

Prominently displayed signs start conversations. School kids who notice the community signage may be inspired to learn about tide cycles, weather forecasting and the environment. The massive educational potential of HWM signs is beneficial in building community resiliency against flooding. Plus, homeowners who come across High Water Mark signage enough times consider the need to purchase flood insurance from the National Flood Insurance Program. Coastal defenses are likely to be built when High Water Mark signs prompt the political support necessary for such public investments.

Federal Working Group Meetings are held monthly between FEMA representatives and community leaders. Local resources are identified during these gatherings as well as support. In addition to meetings, the role of the HWM program is publicized further in community forums and events. Community members involved in the meetings help pinpoint prominent locations for HWM signs.

A community’s perception of flood risks to their area is critical to mitigating losses due to flooding. Research done by FEMA in 2013 estimated that only 10 percent of surveyed residents believe their home is in danger of flooding; and only 30 percent believe their community is at risk for flooding. In fact, extreme weather events in the US produce on average 5,000 floods and 26,000 severe thunderstorms—all of which can lead to flooding.

Numerous instances around the country demonstrate how the High Water Mark initiative has broken ground:

In Minot, North Dakota, a major flood in 2011 cost the city $1 billion in damages. The subsequent High Water Mark program was instrumental in raising awareness of the locale’s flood risk. Minot’s participation in FEMA’s High Water Mark initiative gives the town points, which decrease flood insurance premiums for residents. For example, under FEMA’s Community Rating System, the town has a Class 8 rating. The rating entitles residents to a ten percent reduction on premiums through FEMA’s insurance program.

Residents who are knowledgeable about how deep floodwaters have affected a specific area decrease personal risk and are better prepared for future devastations. Evacuation methods are planned, and emergency kits are prepared in advance.

When your home or business is devastated by a flood, contact a reputable water damage restoration company right away. Skilled technicians arrive onsite quickly to repair and restore properties affected by storms and flooding.

Included in flood damage restoration services is the full extraction of water and excess moisture from the structure. Advanced air movers and powerful dehumidifiers are placed throughout the home or business to remove all traces of water. A thorough sanitization of the home or business is completed to return the property to its habitable state. Carpets and upholstery also are thoroughly dried.