Sewage Backups: Causes, Health Effects, and How to Prevent

Indoor floods and plumbing leaks are difficult disasters to handle because they can result in extensive water damage.  If the flooding in your home contains sewage or is caused by a sewer backup, the situation will be much more dangerous.  Sewage backup contains microorganisms, bacteria, and human waste and those that come into contact with sewage water are at risk for disease or infection.  The mess caused by a sewage backup can only be cleaned up by a trained water damage professional.  Because sewer backups are damaging and hazardous to your health, it is best to know the common signs and causes of a sewage backup so you can prevent them from happening. 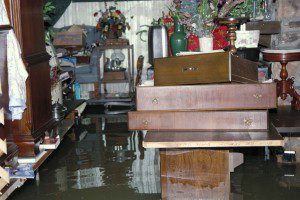 Flooding in your basement may contain sewage.

The health effects from exposure to sewage can range from illness to more serious diseases and even death.  Sewage contamination is responsible for around 2 million cases of illness per year according to the National Resources Defense Council.  Sewage water may contain plenty of contaminants and hazardous materials including bacteria, viruses, pesticides, fungus, microorganisms, and others.  The following are the most common health conditions caused by bacteria in sewage:

If a clogged sewer line is the main cause of a sewage backup, then what causes the sewer line to become clogged? The following are the most common causes:

Sewage backups present a major problem in your home because of the potential damage and negative health effects but by recognizing the warning signs and taking preventive actions, you can prevent a sewer backup.  If you do experience a sewage backup or in-home flooding that may contain sewage, call a water damage restoration professional right away.  These professionals are highly trained to deal with sewage water and ensure that it is removed safely.