Important Facts about Tornado Season to Help You Prepare 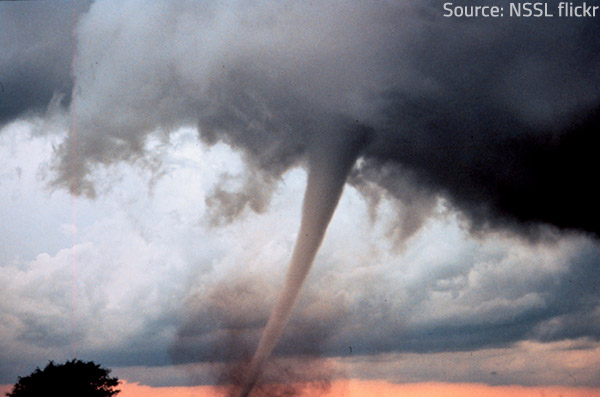 Does it look familiar? May fierce winds blow far away from your property!

Many places around the globe have witnessed the spectacular but often devastating vortex of tornado winds. The United States, however, seems to be the favorite playground for tornadoes in the world – more than 1000 twisters are being reported each year across the country. The Great Plains states, for example, are hit so often by the stormy winds that they got the popular nickname “Tornado Alley”. The reason tornadoes occur so frequently in this particular region is geographical – the unsettled weather conditions in spring when warm Gulf air meets cold Arctic air are to blame. Wind vortices form when warm, moist air rise to hit cool, dry air travelling in the opposite direction. This causes the formation of a rotating wall cloud and subsequently – a visible condensation funnel. It is pulled down due to the very low pressure at the surface created by the intensified updraft and when it reaches the ground, it creates a gust front which can cause severe damages at quite a distance from the actual tornado.

This so-called supercell thunderstorm setup is most common in the Tornado Alley but twisters can form at any place where the weather conditions are right. Some less devastating tornadoes, such as the land spouts and waterspouts, do not form as a result of a supercell thunderstorm and can actually appear anywhere anytime.

What You Need to Know About Tornadoes

When is the tornado season?

More often than not, tornadoes form in spring due to the unsettled weather in the transitional period when seasons change. However, whirling winds can occur whenever the right conditions develop, regardless of the time of the year and the hour of the day.

Usually they sweep across the states from the Southeast to the Northwest. This means that:

Can tornadoes be predicted? 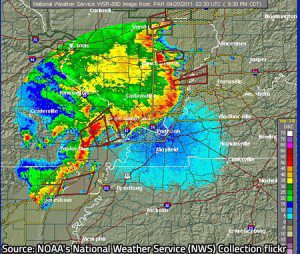 A Doppler radar image indicating the formation of a tornado.

A network of weather radars is the most commonly used method of detecting atmospheric changes associated with a tornado. However, it is not always possible to detect certain meteorological situations leading to a tornado, or the storm may just strike too quickly, before the received data has been analyzed. Climatologists look at the atmospheric patterns to deduce the probability of a tornado formation but a long-term forecast is usually impossible.

Storm spotting is another method used to issue a timely warning about an approaching tornado. The Skywarn program that was initiated in the 1970s, trains storm spotters to look out for signs of severe weather and report tornado hazards immediately. This is especially important for regions located far from the Doppler radars because the radar beams spread out and become progressively higher in attitude with distance, thus not being able to properly detect the weather conditions in remote areas.

What is the difference between tornado watches and tornado warnings?

If a tornado watch has been issued in your area, weather conditions appropriate for the formation of a tornado have been detected. This does not mean that a twister will definitely occur, it only signifies that the probability of it happening has increased. In such cases, you are advised to be alert and follow the weather updates. A good course of action would be to remind every family member where they can take shelter and to check if you have all the necessary safety supplies (see below for details).

A tornado warning means that the Doppler radars have confirmed storm circulation in your area or a tornado has already been spotted. You are recommended to take shelter immediately.

What are the signs of a tornado approaching?

Some tornadoes are not only difficult to detect, but actually invisible! They can be transparent or obscured by rain and clouds. Be alert for the following signs typical of an approaching tornado:

The sky looks surreal when a tornado is approaching.

Noticing any of these signs should raise the red flag for you and make you take shelter. Even if you were mistaken and a tornado doesn’t actually hit – better safe than sorry.

People in the United States are advised to prepare a family tornado plan, specific for their own home and region. Every family member should know where they can take shelter in the event of a tornado and where is the pre-determined place to meet the others when the storm is over (if they have been separated).

In case you live in the Great Plains states, you are recommended to build an underground tornado shelter or even an external storm cellar (this is the best possible protection – not only will you be sheltered from the winds and the flying debris but even if the main building collapses due to a violent tornado, you will still be able to exit without any problem). If your property does not allow the construction of such protective shelters (an apartment, for example), make sure there is at least one internal room with no windows in your home – it could be a storage room or a bathroom.

Regardless of the region you live in, you should have designated an enclosed windowless area in your home to serve as a safe-haven in case of a tornado. Store protective coverings in your shelter area, such as sleeping bags and mattresses, or at least very thick blankets, to cover yourself. This soft protection will keep you safe from falling objects and collapsing structural elements. 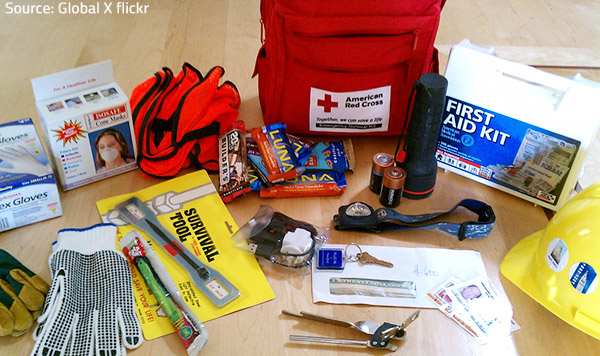 Be prudent! Preparedness can be the difference between life and death.

When preparing for the tornado season, don’t forget a “survival kit”. It should be kept in your safe room and should contain enough supplies for surviving 2-3 days in the shelter. The kit should include:

Proper tornado preparedness requires that you get acquainted with the safety plans and requirements specific for your area, and that you practice tornado drills at least once a year.

Make sure your home is well maintained and there are no leakages and holes or broken vents and the like which can aggravate the situation in case of a tornado.

What to Do in the Event of a Tornado 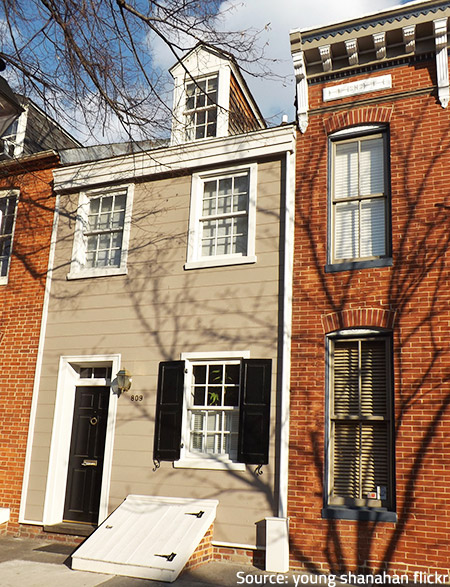 You’d better have a plan B in the event of a tornado.

A tornado warning generally gives you only a few minutes, so make sure you and your family take shelter as soon as it has been issued.

Do not open the windows! Contrary to popular beliefs, this will not equalize pressure but will only allow more debris to fly into your house and will result in greater damage.

Go directly to your underground shelter if you have one. Make sure not to stay under the places where large heavy items, such as safes or bathtubs, are positioned on the upper floors. If the floor collapses, these may fall and hurt you.

If you have no basement, go to the lowest level of the building, into a windowless interior room or hallway, or at least under a stairwell. Stay low on the floor, under a sturdy table or into a bathtub, and protect your head with your hands. Make sure you are away from glass and shelves or any objects that could fall and hurt you.

Cover yourself with protective coverings and wait for the storm to pass. If possible, turn on the radio to listen for updates and important information concerning the tornado and the recommended course of action and stay in the shelter for at least several hours.

If you are in a public building, don’t panic – follow the signs to the nearest shelter area and proceed in the same manner as described above – get under a stairwell, away from glass and falling objects, and crouch as low on the floor as possible, facing down and cover your head.

If you are driving and notice a tornado far away, try to get away from its path by moving really quickly at a right angle to the tornado (in urban areas, don’t even think of it – just get out and search for a shelter). However, if a tornado hits while you are in a vehicle or in a mobile home, leave immediately and get into the nearest sturdy building. If there is no time or no appropriate shelter nearby, stay inside with the seatbelt on, lower your head below the windows, and cover yourself with a coat or a blanket, whatever you have.

If you are outdoors, lie flat in a nearby depression and cover your head with your hands. Stay away from cars and trees because the winds may blow them onto you and be alert for possible flooding.

Searching for shelter under bridges and overpasses is actually more dangerous than staying in the open! The structure could collapse or the debris might be funneled there, posing great threat. 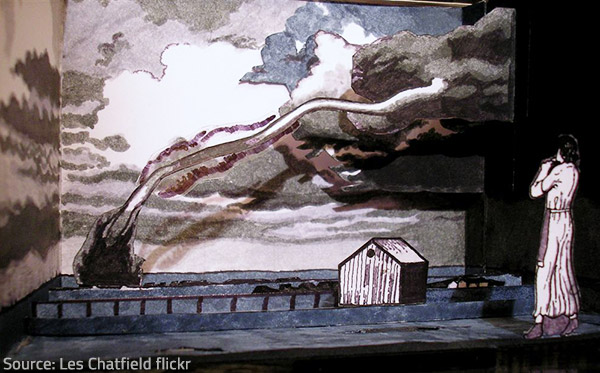 If tornado winds are rocking your house to and fro, don’t push the panic button – remain calm and take shelter.

After a tornado, remain calm and try to help people who have been injured. Stay away from damaged buildings and power lines and be careful not to step on broken glass or other sharp objects. Listen for information and instructions and wait for the emergency personnel to arrive.

Consider all these important tornado facts and tornado safety tips when preparing for the tornado season. Unfortunately, the most violent whirling winds can level and blow away however sturdy a house, but such severe storms are really rare. Most injuries and damages are actually caused by flying debris. So, gather information about tornadoes and devise a smart tornado preparedness plan to ensure your and your family’s safety.

In case of a disaster call a professional like ServiceMaster to restore your property and life.

You can reach ServiceMaster Complete 24 hours a day at (918) 932-1333 for emergency restoration services in Tulsa, OK.