The Warning Signs of a Tornado 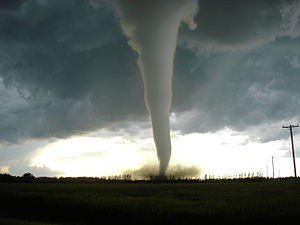 Tornadoes are among the most feared weather phenomena because their dangerously strong winds can cause devastating damage that has been known to take lives.  The winds of a tornado can exceed speeds of 100 miles per hour which can easily damage homes and buildings as well as uproot trees and toss cars and other heavy debris as if they are toys.  The United States experiences more tornadoes per year than any other country in the world and even though the Southeast and Midwest are the most vulnerable, it is possible for a tornado to form anywhere in the U.S.  Before a tornado occurs, there are usually several warning signs of the impending storm.  It is very important to recognize the signs of a tornado so that you can prepare and get to a safe location, especially if you live in a tornado prone area.

The Difference Between a Tornado Watch and Tornado Warning 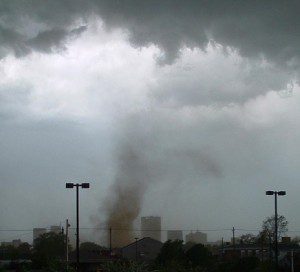 The debris cloud can clearly be seen at the bottom of this invisible funnel cloud. Source: Wikipedia

There are several observable warning signs of a tornado that will let you know when the threat of a tornado is imminent.  The early tornado signs include increasing winds, rapidly moving clouds, and a greenish color to the air and clouds.  Hail, which is another early warning sign of a tornado, is what causes the sky and clouds to appear green or greenish yellow.

The following warning signs appear when a tornado is imminent in your area:

The most effective way to keep your home and family protected from tornadoes is to prepare beforehand and have a safety plan established for when a tornado does occur.  Choose an area of your home to take shelter and make sure your family understands what to do when there is an impending tornado.  This blog regarding tornado preparedness and safety provides more information on how to prepare for a tornado.

If you live in an area that is vulnerable to tornadoes, make sure you are familiar with the warning signs of a tornado so that you can prepare and take shelter.  However, even the most extensive preparation cannot prevent a tornado from causing significant damage to your home.  If this happens, it is important to call a storm damage restoration professional immediately to clean up the damage and get your home back to its original condition.