Fire Tornadoes – What Are They?

We have all heard of wildfires and tornadoes, but what happens when they join together? Fire tornadoes. Intense wild fire can create tornado like vortices that are often call fire tornadoes. They occur when extreme temperatures create rapidly rising air which brings in horizontal air flow which rises rapidly. These whirlwinds gain momentum with the large amount of air being pulled in. 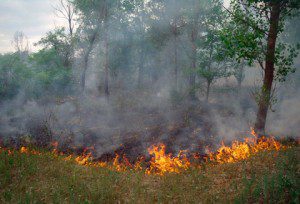 A typical fire tornado can grow to about 100 feet but looks drastically slimmer than a regular tornado, some being only a couple feet wide.

Even though the idea of a fire tornado may be uncommon, they actually happen quite frequently. Forest fires and brush fires occurring across the States reach extreme temperatures which will create these fire whirls. Many times people missing them because of extreme heat and evacuations. But today with the technology of cameras, we can see them happening more often.

These fire tornadoes are often times not something you can prepare for since they happen after evacuations already occur. Preparing your home for wildfires and brush fires is always a safe and great idea. Learn how to prepare your home for forest fires here!

We have seen that over time the worls has been experiencing more intense fires. In the past decade the amount of global fires has increased drastically. These fires produce large amounts of smoke and chemicals into the air as well as particulate matter. This affects the way clouds form as well as local weather and long term climate change.

Forest fires seem to follow a trend. When the climates warm, the atmosphere is a little dryer, while there being more people living in close proximity to fire prone areas. It has been predicated that areas of the Great Plains and Midwest that don’t see a lot fo fire activity today will start to produce forest fires in the next couple of decades. This goes along with areas that are already fire prone, they will be seeing more fires as well.

If you want to find out more about forest fires, carbon dioxide levels, trends, satellites and programs, visit nasa.gov/fires.

If you experience damage to your home because of a forest fire, don’t hesitate to call a local fire restoration company!

Representing RestorationMaster Finder as a Copywriter and Social Media enthusiast.