Everyday Behaviors that are Common Causes of House Fires

Nobody wants to wake up or come home to their house burning down because a house fire can destroy a home and everything in it within such a short period of time.  While house fires generally happen with little or no warning, most fires are preventable as they may be caused by certain behaviors that many homeowners are unaware can actually increase the risk of fires.  Some of the most common causes of house fires include these behaviors which makes awareness of these behaviors and home fire safety practices very important among homeowners.  The following are common behaviors that are among the top house fire causes that you should avoid to prevent house fires. 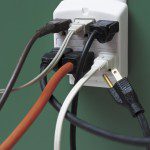 Overloading a single outlet can cause a fire. Source: Flickr

Putting Electrical Appliances Too Close Together 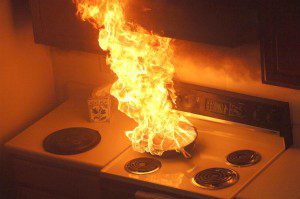 It only takes a few seconds for a stove top fire to start. Source: Flickr

The leading cause of house fires is unattended cooking and even though just about every list of fire safety tips includes this risk, it remains the most common cause.  Many homeowners think there is no harm in walking away from the stove for a few minutes while cooking but a fire can start in just a few seconds if cooking food is left unattended.  You should always be vigilant when cooking to reduce this risk and try to avoid cooking methods such as frying that are more likely to cause fires.

Excessive Use of Extension Cords and Power Strips

You should always check electrical cords around your house to make sure that none of them are damaged or worn out.  Damaged cords are more likely to cause an electric shock and if the outside coating of the cord is worn out, the heat it generates can cause a fire through direct contact with flammable material.  Checking for and replacing damaged worn out cords can help prevent house fires.

Leaving an Appliance on in an Empty Home

If you leave your house for any amount of time, make sure your electrical appliances are turned off.  A single malfunction when you are away can very quickly turn into a large fire that will consume your home.  One of the few appliances that is deemed safe to leave on in your empty home is a crockpot because they do not generate enough power or heat to be a serious fire risk. 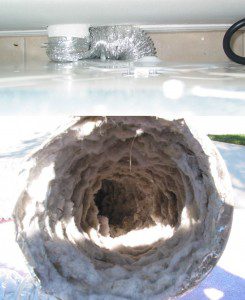 Excessive lint buildup in the dryer hose is a fire risk. Source: Wikipedia

Excess lint in the dryer is the second leading cause of house fires after unattended cooking.  Cleaning the lint out of the trap on the dryer only takes a few seconds and establishing a habit of cleaning out the lint trap with every use will greatly reduce the risk of a fire.  You should also check the dryer hose annually to make sure it is clear of lint and debris.

Many people like to light candles in their home to create a certain mood or because they enjoy the smell but it is very important that you do not forget about a lit candle or leave it unattended.  Just one candle can cause a major fire and all it takes is for the candle to get knocked over or the flame to get too close to something flammable.  Make sure to put your candles in sturdy holders away from anything that can possible catch fire and always blow them out before leaving the room or the house.

The risk of a house fire in just about every home is very real and even though many homeowners may believe that their homes are safe, the common behaviors listed above can actually be putting your home more at risk.  These everyday behaviors are among the leading causes of house fires because they are so common and it is important for homeowners to realize the danger in these behaviors and avoid them to help prevent house fires.  However, even with the best home fire safety habits, a fire can still be started by something out of your control and when this happens, a fire damage restoration specialist is needed to get your home restored.  Avoiding these behaviors that increase the risk of a fire is the best form of protection.