The 5 Classes of Fire and How to Extinguish Them 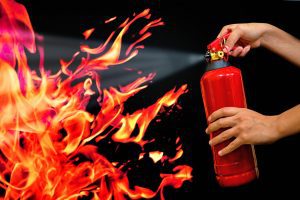 If you extinguish fires using incorrect methods, you could end up making the fire worse.

There are five different classes of fires, and a different letter is used to identify each one: Class A, B, C, D, and K. It’s important to know the different classes of fires, because knowing the differences between each class helps in figuring how to extinguish the fire correctly. If you extinguish fires using incorrect methods, you could end up making the fire worse. Furthermore, the fire class corresponds to the type of fire extinguisher that’s needed to put out the fire.

The following is a description of each class of fire, including the best ways to put them out.

Class A fires concern ordinary materials. Examples of such materials include cloth, paper, plastic, rubber, trash, wood, and other things that can catch on fire easily if they are by a heat source. This is the type of fire commonly thought of when it comes to residential fires.

Class B fires concern flammable liquids. Examples of such include alcohol, diesel oil, lacquers, oil-based paints, petrol, solvents, tars, and other flammable gases. This is the type of fire that can easily begin in a garage.

Class C fires concern electrical equipment. Examples of such equipment include appliances, circuit breakers, computers, motors, plug sockets, servers, transformers, and wiring. You should also be aware of smaller electrical equipment, such as cell phone chargers and computer cords. This is the type of fire that can be found in homes if sourced by old appliances or in a garage if sourced by a car motor or battery.

There are multipurpose fire extinguishers available that can put out Class A, B, and C fires that use a dry yellow powder called monoammonium phosphate. However, such a substance leaves behind an unpleasant residue that can cause more damage if it isn’t immediately cleaned up.

Class D fires concern combustible metals. Examples of such metals include aluminum, lithium, magnesium, potassium, sodium, titanium, and zirconium. This is the type of fire that’s typically found in manufacturing facilities but can also occur at home if one has these combustible metals around.

Class D fire extinguishers must be used for Class D fires, which are typically found in chemical laboratories.

Class K fires concern substances often found in kitchens. Examples of such substances include animal oils, fats, grease, and vegetable oils used for deep fryers and other cookers. Water should never be used on Class F fires and neither should a Class A fire extinguisher, because doing so creates a fire ball that’s more dangerous than the original fire. You must use a Class K fire extinguisher to put out these types of fires.

Use this information about the five classes of fire as a reference for how to extinguish a fire properly. Doing so can help save your home or property from extensive damage. If you find that your home or property has suffered damage from a fire that you were unable to extinguish or weren’t around to put out, be sure to seek immediate help from a fire damage restoration service provider. The sooner you act, the sooner the damage can be addressed. Professional restorers will contain the damage, clean up your property, and repair damaged building materials.