Many disasters can leave behind lingering odors, and be especially difficult to remove. Derived from floods, mold, fires, or smoke, they will need professional equipment in order to eliminate properly.

ServiceMaster Quality Restoration provides professional deodorization services in Charlotte, NC to fully eliminate odors after a disaster or other occurrence. Our technicians use a variety of equipment, including hydroxyl equipment, thermal fogging, Nano carbon, and ozone technology. We are also licensed and experienced to ensure that the smell is eliminated at its source. 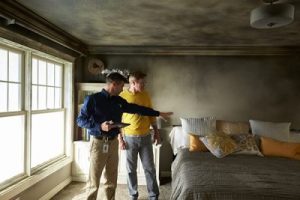 Odors from disasters, vandalism, or nuisance animals can become absorbed into a number of porous surfaces, including furnishings, walls, wood floorings, and ceilings. While air fresheners seem like a good idea, they will only mask the odor temporarily; it won’t take long until the odor comes back to create a nuisance again.

Only professional equipment will be able to eliminate it at its source. The deodorizers used by our technicians are more than capable of taking care of this for you. We just ask that everyone vacate the property before the service, including pets and plants, as the equipment will also consume the oxygen from the living space.

Our services cover odors from all of the following:

ServiceMaster Quality Restoration uses a multi-step process to remove odors while preventing them from returning. The process includes all of the following steps:

Many of these odor sources can be treated by our technicians:

If your home or business contains a lingering odor leftover from a disaster or a nuisance animal, don’t hesitate to reach out to a professional service to eliminate the odor particles from within.

ServiceMaster Quality Restoration is available at (704) 603-6223 in Charlotte, NC to provide effective odor removal services to remove all traces of foul smells.

William Shaw
Monroe, NC
The most complete service available
Report a concern
William Wilson
Charlotte, NC
Very professional.
Report a concern
S.J.
Charlotte, NC
Service Master responded extremely quickly when we had a devastating water leak which caused a deluge of water to erupt from the ceiling between the first and second floor and caused immense damage to the flooring and furniture throughout the house. Service Maser were there within an hour and immediately commenced removing all the water and getting dryers and dehumidifiers into the house to dry it out. Where the drywall was soaked it was removed and the house tested to ensure no contaminants remained. We are very grateful to Service Master for their quick response to our call for help.
Report a concern